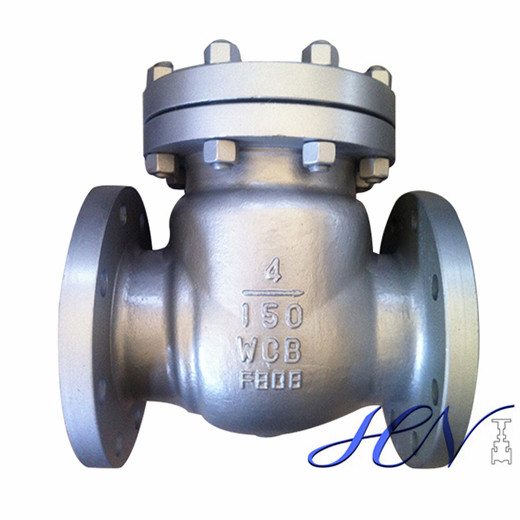 What is swing check valve ?

1. The principle of opening and closing of the swing-type check valve is the same as that of the lift check valve. It is also operated by the fluid pressure and the self-weight of the valve disc. The difference is that the opening and closing mode of the flap is a rotary motion instead of moving up and down. The inlet direction of the fluid should be on the side that can impact the flap.

3. The swing-type check valve is composed of a valve body, a valve cover, a valve flap and a rocker. The valve disc is disc-shaped and rotates around the pin shaft outside the valve seat passage. The valve channel is streamlined and has a lower flow resistance than the straight-through lift check valve. It is suitable for large diameter pipes. However, at low pressures, the sealing performance is not as good as that of the lift check valve. In order to improve the sealing performance, an auxiliary spring or a heavy hammer structure may be used to assist the sealing.

What is the purpose?

What is the structure?

The swing-type check valve adopts the built-in rocker arm swinging structure. All the opening and closing parts of the valve are installed inside the valve body, and do not penetrate the valve body, except for the sealing gasket and the sealing ring of the middle flange part, the whole There is no leakage point to prevent the possibility of valve leakage. The swing-type check valve has a spherical connection structure at the joint of the rocker arm and the valve flap, so that the valve flap has a certain degree of freedom within a range of 360 degrees, and has appropriate micro-position compensation. Suitable for clean media, not suitable for media containing solid particles and high viscosity