Improvement of the ball valve seal

The cast ball valve is an opening and closing device in the ash slag pipeline. The sealing on it directly affects the quality and service life of the industrial valves. In the past, an O-shaped rubber sealing structure was adopted, in which an O-ring was placed in an annular groove machined on a shaft, and then assembled into a hole formed in the sleeve part to form a seal of the shaft and the hole. 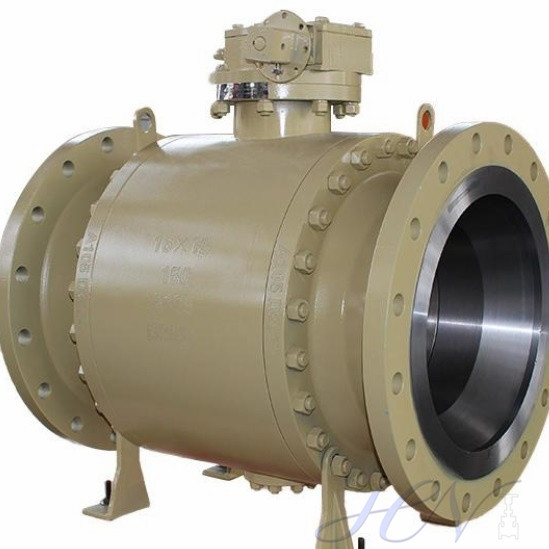 Due to the dynamic cooperation between the valve stem and the valve body, there is a certain gap. When the valve is switched, the medium exerts a huge thrust on the ball, which inevitably causes the valve stem to have a certain inclination. The force of the valve stem is biased to one side, and the side is seriously worn. And the ash water contains a large amount of suspended matter to erode the seal. The O-ring seal of the valve stem has a short life cycle, and the leakage phenomenon often occurs, which also has a certain influence on the site environment. Therefore, it is decided to improve the sealing structure and materials. The main starting point of the improvement is to assemble the shaft and the hole. In the middle, it is possible to adjust the amount of compression, and it is possible to ensure effective sealing without greatly improving the machining accuracy of the shaft and the hole.

The X-shaped sealing ring has a sealing surface around it, and there are lubrication grooves on the outside of the sealing ring. This structure is superior to the O-shaped sealing ring, has low installation precision, good reliability, no maintenance, low price, and can also pass the gasket. The compression amount adjustment has been widely used in the sealing of various pressure grade cast valves, which can effectively prevent the occurrence of leakage, greatly prolong the service life of the valve and improve the reliability of the valve.

The X-shaped sealing material is made of polyurethane (CPU) material, which can effectively solve the problems in the traditional O-ring. Castable polyurethane is a kind of sealing material that has passed the international comparison. It has large elastic modulus, good physical and mechanical properties, and can withstand large impact loads. Polyurethane has basically solved the problem of hydrolysis resistance, and the temperature resistance level is also constantly improved, greatly expanding the application of polyurethane. The use of cast polyurethane to produce X-shaped seals is simple in process and low in manufacturing cost. Its pressure resistance level can reach 60MPa or even higher, and the pressure holding effect is also quite good, basically reaching zero leakage.

3, the principle of the ball valve sealing

The working principle: When the bolt is tightened, the packing gland moves downward to press the adjusting pad, and the inner lip and the outer lip of the X-shaped sealing ring are simultaneously pressed against the sealing surface of the shaft and the hole through the extrusion of the V-shaped packing pad. To ensure reliable sealing, the main sealing performance depends on the pressing force of the tightening bolts during assembly and has little to do with the shaft and hole dimensional accuracy.

The abrasive material is suitable for 45 steel;

The 10° slope positioning has no flash, the precision of the product is guaranteed, and the yield is high;

The grinding tool consists of an upper die, a lining die, and an outer die.

5, the size of the filling cavity

The filling chamber determines the amount of seasoning according to the pressure of the ball valve and the size of the caliber. The width is determined by the size of the shaft. Pressure 0.6~2.5MPa, DN250mm or less to prevent an X-shaped seal ring; 2.5~10MPa, DN300 or more place two X-ring seals. The depth of the packing chamber is determined by the height of the timing pad, pressure transmission ring, and X-ring.

The X-ring is a lip seal that is used in combination with a pressure ring (filler gland) and a support ring (filler pad) to prevent media leakage.

Third, the summary of the ball valve seal

Through improvement, the valve structure is more reasonable, the sealing is more reliable, the raw materials are saved, the cost is reduced, the service life is improved, the modification is fast, the investment is small, and the user's needs are met.