2.The seal of industrial gate valve,

3.The use of industrial gate valve.

The gate valve is sealed by the contact between the valve seat and the gate. Usually, the sealing surface will be welded with metal material to increase wear resistance, such as surfacing 1Cr13, STL6, stainless steel, and the like. The gate has a rigid gate and an elastic gate. According to the gate, the gate valve is divided into a rigid gate valve and a flexible gate valve. 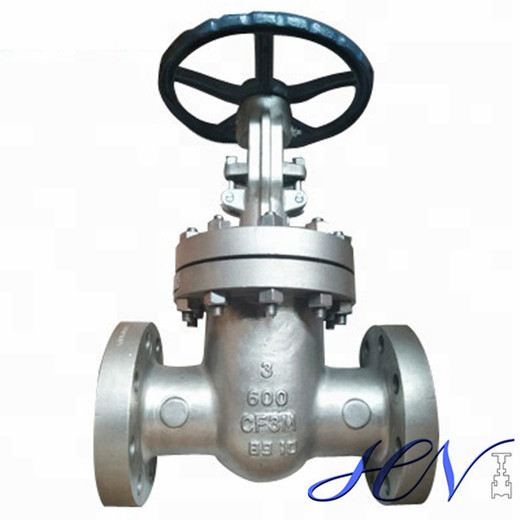 The direction of movement of the gate is perpendicular to the direction of the fluid. The gate valve can only be fully open and fully closed, and cannot be adjusted and throttled. The gate has two sealing faces. The two sealing faces of the most common mode gate valves form a wedge shape. The wedge angle varies with the valve parameters, usually 5°, and the medium temperature is not 2°52'. The gate of the wedge gate valve can be made into a whole, called a rigid gate; it can also be made into a gate that can produce a small amount of deformation to improve its processability and make up for the deviation of the sealing surface angle during the machining process. The board is called a resilient shutter.

The seal of industrial gate valve

The gate of the gate valve moves linearly with the valve stem, which is called a rising stem gate valve. Usually, there is a trapezoidal thread on the lifting rod, and the rotary motion is changed into a linear motion by the nut at the top end of the valve and the guide groove on the valve body, that is, the operating torque is changed to the operating thrust. When the valve is opened, when the lift height of the gate is equal to 1:1 times the diameter of the valve, the passage of the fluid is completely unblocked, but this position cannot be monitored during operation.

The use of industrial gate valve